[Editor’s Note: I wrote this right after our 5K race on Jan. 10 – and then never went back to edit it and add photos!  Now that we’re approaching our half-marathon date, I decided it was time to actually finish this post!]

In my last post, I explained the pre-race process of attending the runDisney Health and Fitness Expo.  The next day of Race Weekend began with a record-breaking experience for me.  Not the race.  The wake-up.

The day started at 2:30am.  I’ve never in my life started a day that early, not even at the Albuquerque Balloon Fiesta!  We had to be at the Epcot parking lot by 4:30, and had been forewarned to expect traffic backups, so we planned to leave our home by 3:30 (our typical drive to Disney World from this RV park is about thirty minutes).
There was a lot of helpful information in Disney’s guide about getting to the race from Disney resorts, but not much at all if you’re driving in on your own, other than to expect lots of traffic and road closures.  It turned out that there were no road closures for the 5K, so we entered Epcot just the way we always do, and the traffic was steady, but not to the point that it delayed us.  We left home about fifteen minutes late, and pulled into our parking spot about 4:15.

I had also read that there’s about a 25 minute walk from your arrival at the parking lot to the corrals at the starting line, which I couldn’t quite figure out.  It turns out that it’s because of pedestrian barricades that are set up to control the flow of people – similar to walking through a ride line at Disney that makes you criss-cross a path that would have been ten times shorter if you could go straight.  Along the path, we passed a few rows of porta-potties, the place to check in those clear plastic bags of your stuff, and lots of tents of individual charities that specific runners were supporting.

We finally made it around to the corrals, which had their own absolutely enormous line of porta-potties.  I had read about the corrals, but didn’t know quite what that meant.  Once we got there, it was pretty clear.  Using pedestrian barricades, there were three large sections for people to file into, labeled A, B, and C.  Your section is determined when you first sign up for the event.  As part of the registration, you have to choose your finish time estimate.  As someone completely new to this, I had no clue what to mark, so I just put all of us in the very last time category.  At least that was my intent.  I realized later that I had just hit the bottom category on the screen for Mr. Bang and the Brain, instead of scrolling to the very bottom as I did for Character Queen and myself.  There’s no way to go back and adjust times for the 5K.  As a result, the guys ended up designated for B and we girls were designated for C.  You cannot move up a corral, but you can move back, so the boys went into the C corral with us. 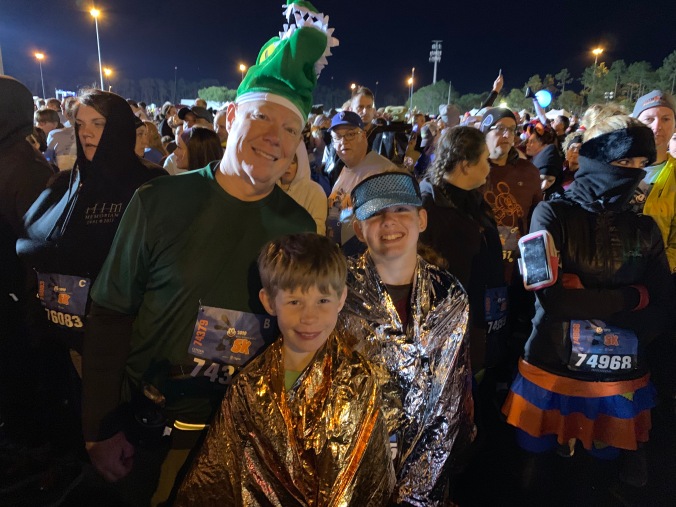 Waiting in Corral C, wrapped in mylar blankets to stay warm. The kids decided we would all dress in Peter Pan-inspired clothing: the crocodile, Peter Pan, and Tiger Lily are here, and I was Captain Hook.  (Our costumes just didn’t account for the cold weather!)

A detail we learned after signing up is that there is a pace limit.  At the very back of the runners are the Balloon Ladies – volunteers running a 16 minute pace through the entire race.  If you get behind them, you can get carted off the course and driven to the finish line, your hopes and dreams of successfully crossing the finish line left on the running track behind you.  The farther up you start, the more bonus time you get, and a greater chance of beating the balloon ladies.  So putting ourselves in the last group was not a very smart plan!  We positioned ourselves about halfway along the giant mass of people in corral C, trying to put as much distance between us and the balloon ladies as possible!
As we stood in the corral, we spent the time admiring people’s costumes, getting our bibs pinned on, and trying not to freeze!  It was in the upper 30s, which is unusually cold for Orlando!  Two days before and two days after it was in the 70s, but this one day, it was darn cold.  There was a stage with a dj who was playing music and trying his best to energize us.  As it got closer to 5:30, some official runDisney people went on stage to do more crowd-energizing shenanigans. 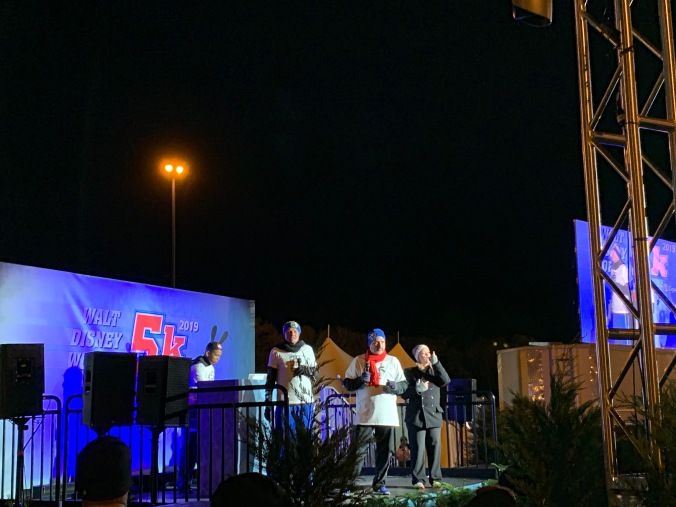 The race officially began at 5:30.  I knew everyone didn’t start running right then, so I was curious to see how that worked.  It turns out, I had a full hour to watch how it worked.  A little before 5:30, they led those in corral A behind a rope on yet another surprisingly long walk to the start line.  At 5:30, the wheelchair athletes started.  Next were the fast-pace runners, who actually do this as a real race, trying to win.  They would let probably 500-1000 people at a time cross the finish, wait two minutes, then let the next wave of people through.  With each group, there was a countdown and fireworks.  When about half of the A group had gone through, they led the B corral to join the line.  Finally it was our turn in C.  We ended up crossing the start line right about 6:30.  So, track that – that’s nearly two hours of standing still out in the cold morning air before we ever started running!  As we started, we passed lots of runners waiting for their buses to head back to their hotels, having already completed the course. 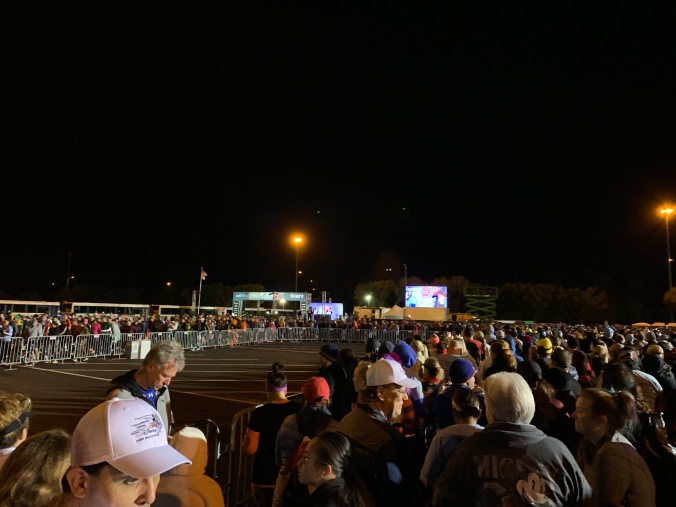 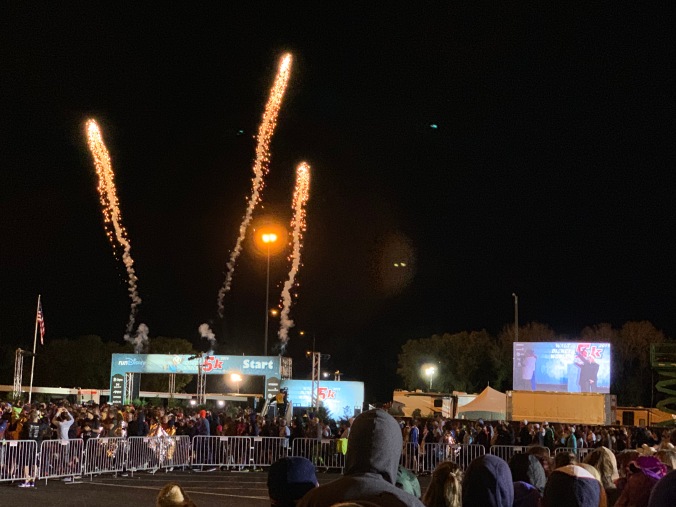 fireworks as a wave of runners takes off

Running ‘Round the (Epcot) World

The race itself was very fun.  For the first mile, we ran from the Epcot parking lot through some backstage areas of Epcot.  Right around the one mile mark, we entered Epcot next to the Mexico pavilion.  We circled around the World Showcase during sunrise, which was so beautiful.

There were lots of fun characters out – with long lines for each.  We didn’t stop for any of those photos for a few reasons.  For one, Mr. Bang really doesn’t like photos with characters, because it’s a stranger who he can’t even see inside that costume.  Two, he already was in a not-very-magical mood, so it wasn’t worth adding in photo lines to make his moodiness worse.  Three, we wanted to stay ahead of those Balloon Ladies!  I frequently just pulled over to take a quick photo, then caught back up with the fam.  We made one bathroom stop in Norway, but otherwise kept up our normal run-walk-run pace (60 second run/60 second walk). 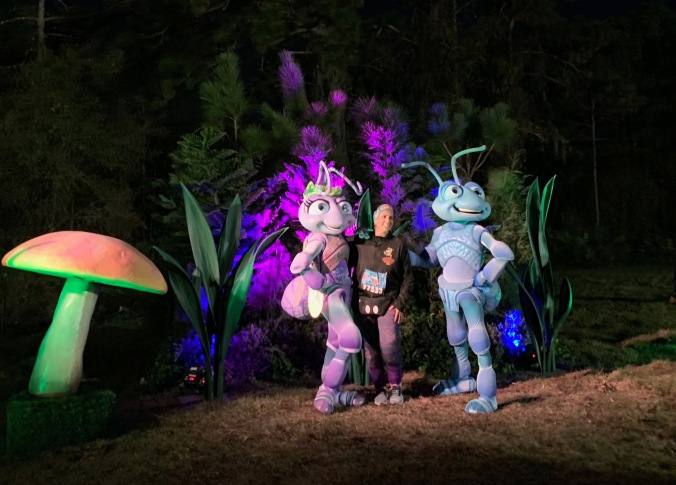 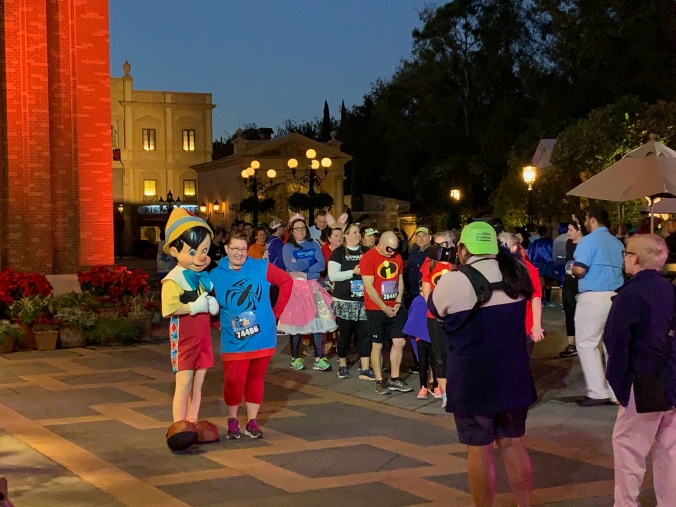 Two other things that made the race really fun were the loud, fun music playing over the sound system and the great, creative costumes other runners had come up with!  One of our absolute favorites was a group of around ten people running in a row, carrying cardboard cut-outs of a monorail (along with one guy portraying Spaceship Earth). The leader even had actual monorail recordings, warning to stand back because the doors were closing, and telling facts about rides and landmarks as we passed them, including Spaceship Earth and Test Track. We passed the monorail group early on, and kept coming across them from time to time.  We hurried to beat them across the finish line, because we weren’t going to be beat by a monorail! 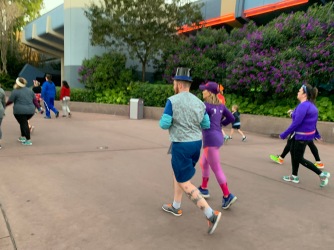 There were also tons of Disney photographers placed all over the course.  We tried various things for photos – jumping, holding hands up, etc.  Looking at the final results, I think my favorite photos are the ones where we just ignored the photographer and focused on running! 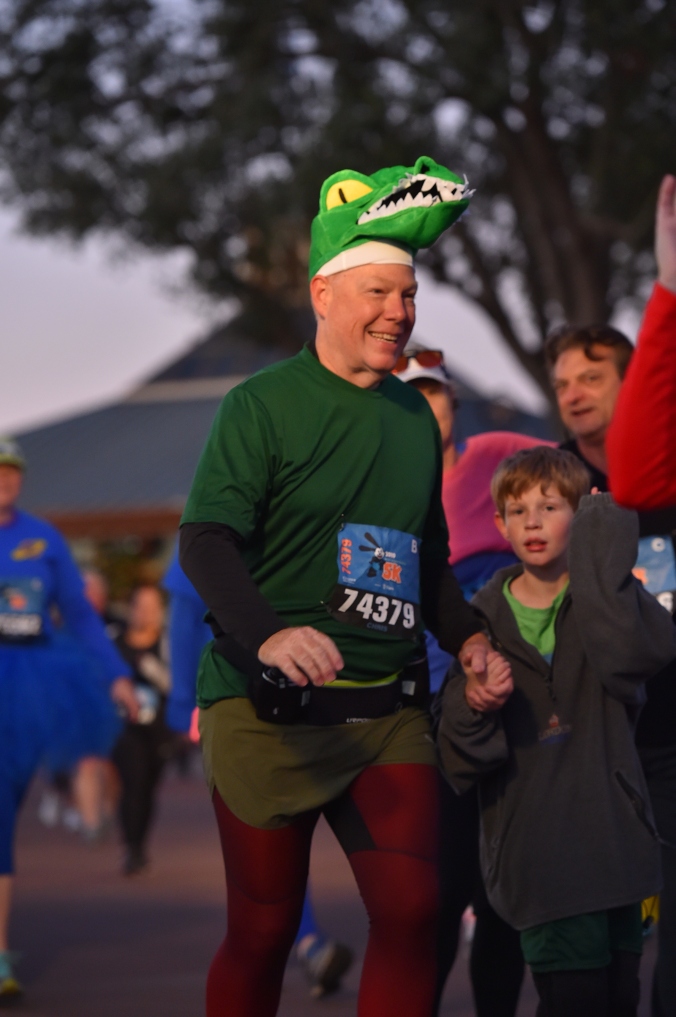 When we passed Spaceship Earth, it got very exciting, because we knew we were almost done!  A “hallelujah chorus” was there singing to encourage us to the end.  And then we ran across the finish! 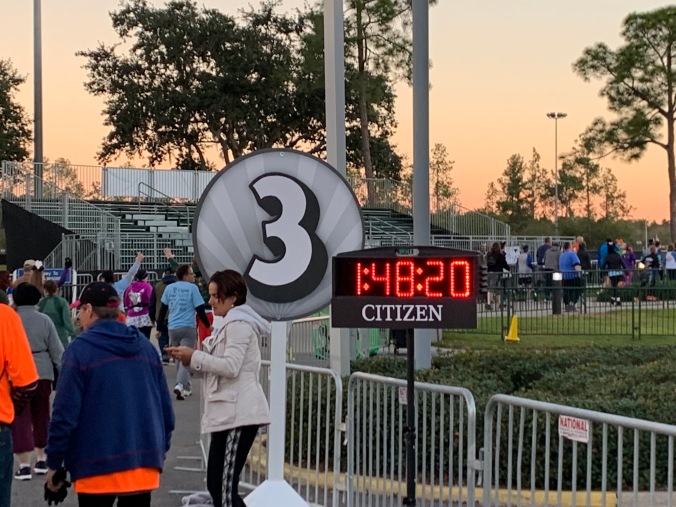 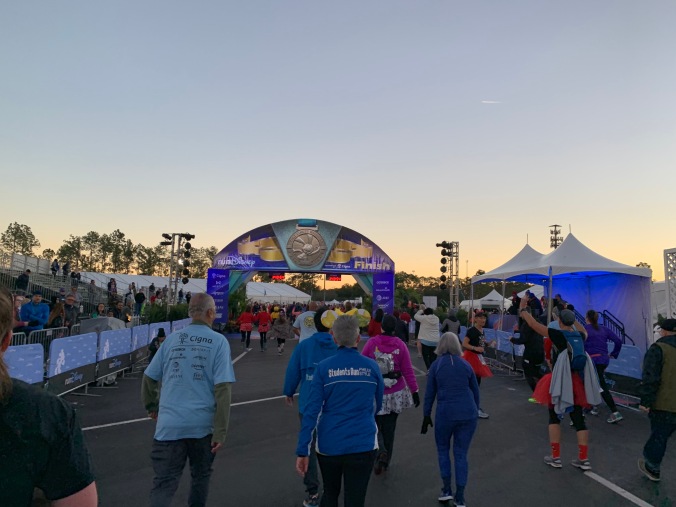 That’s when we came to my next “what happens now” moment.  I had read that you cross through the finish line, and then people are standing there to give you a medal.  I crossed the finish line…and saw a lot of people.  No people with medals.  We walked a bit further to get to the medals.  I wanted to take a photo of people in our fam getting medals, but that didn’t happen because we pretty much all got medals at the same time by different people. Then we kept walking and at various points along the path, people offered us things: bananas, water bottles, Powerade bottles, snack boxes.  That was pretty fun, although a bit hard to hold it all!

They also had huge rolls of mylar blankets they were handing out.  We didn’t take any because we weren’t cold after just finishing the race.  However, by the time we had completed the long walk to the car, I was kind of wishing we had! 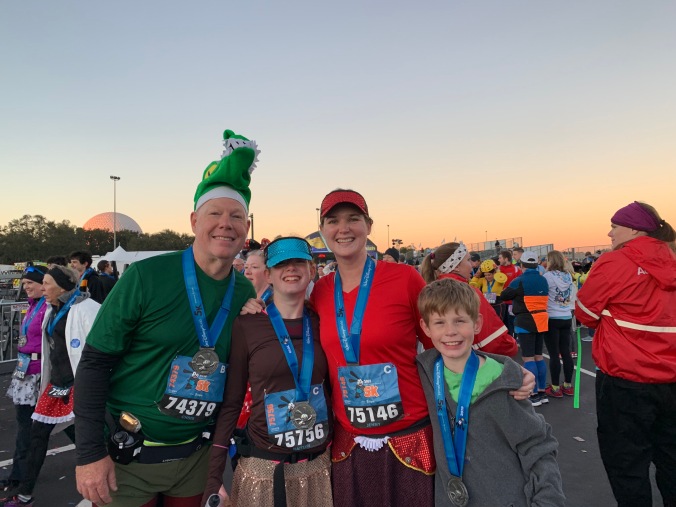 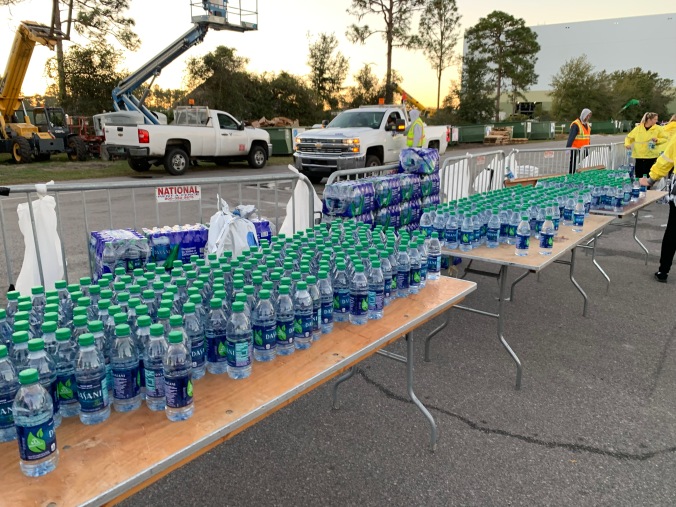 After the race, it was time for our celebration breakfast!  We had reservations at Chef Mickey’s at the Contemporary Resort.  We started with plates of fruit, eggs, bacon, etc.  Then it was time to hit the Mickey waffle bar.  If you haven’t eaten at one of the Disney breakfast buffets, the thing to know is that the Mickey waffle bar looks just like a frozen yogurt joint – a whole selection of various candies to top your waffle.  For Character Queen and Mr. Bang, the waffle was purely a carrier for the “good stuff.”  They each set a waffle on their plates – and then piled the plates high with Nerds, gummy bears, M&Ms, marshmallows, etc.  Character Queen ate a bite of her waffle then set it aside.  Mr. Bang never even touched his waffle.  It was all about the pile of candy.  Normally we would not let them eat a plateful of candy at 8am!!!  But on race day, go for it! 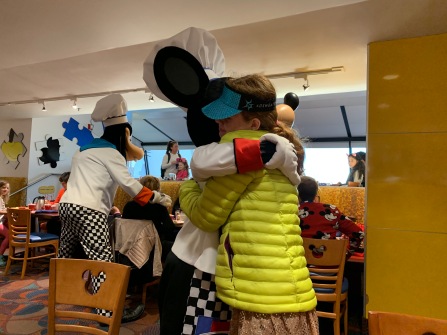 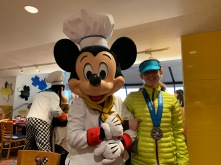 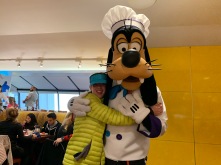 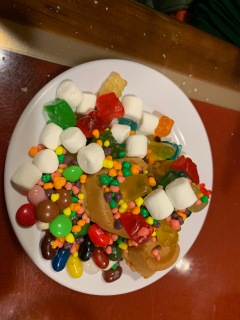 Overall, it was a super fun experience.  It really made me excited about running the half-marathon in February with just my husband – no pouty kids complaining and not wanting to run!  In February, we should have time for character lines and fun photo stops along the way.  And we may still top it off with a yummy Mickey waffle!

After breakfast, we enjoyed walking along the sidewalk into Magic Kingdom.  We didn’t spend long, but wanted the opportunity to spend a little time in the park with our hard-earned medals! 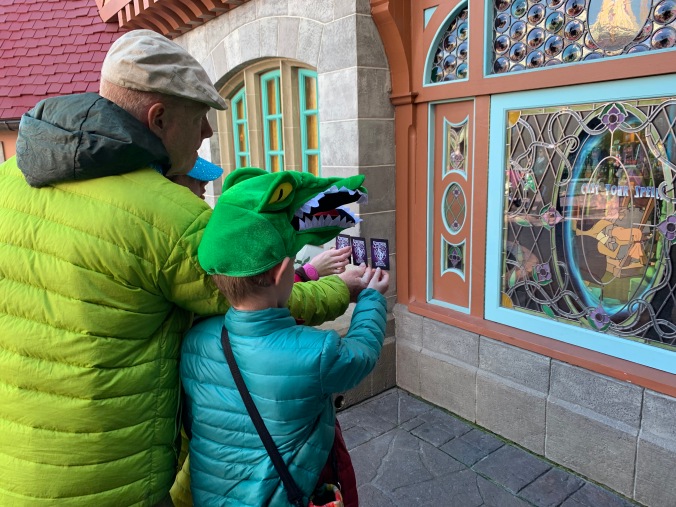 playing Sorcerers of the Magic Kingdom 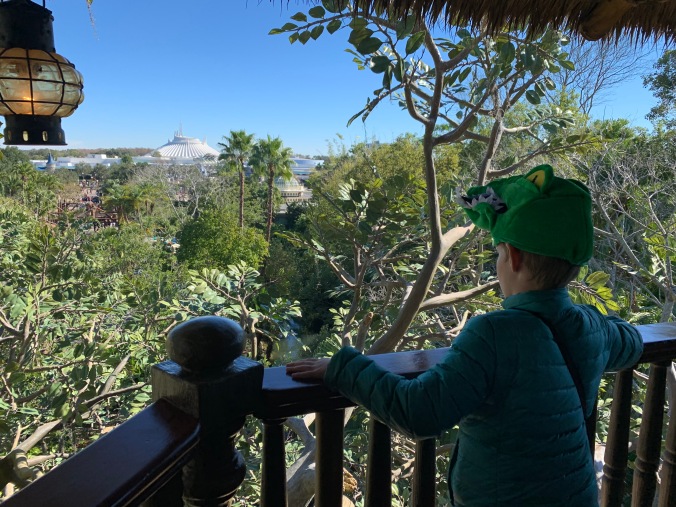 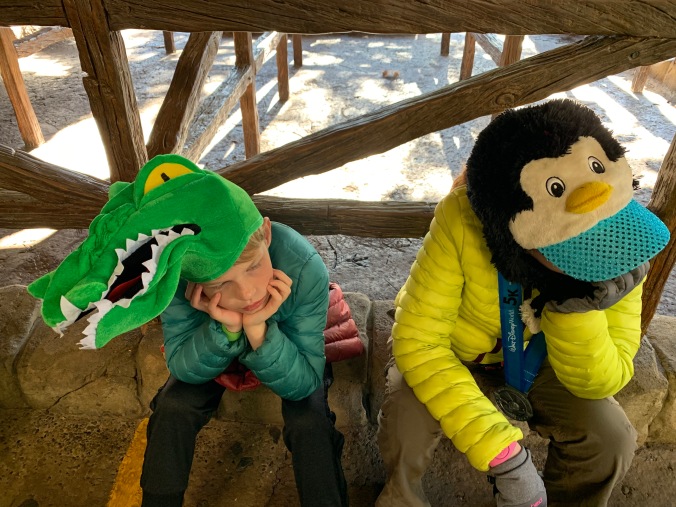 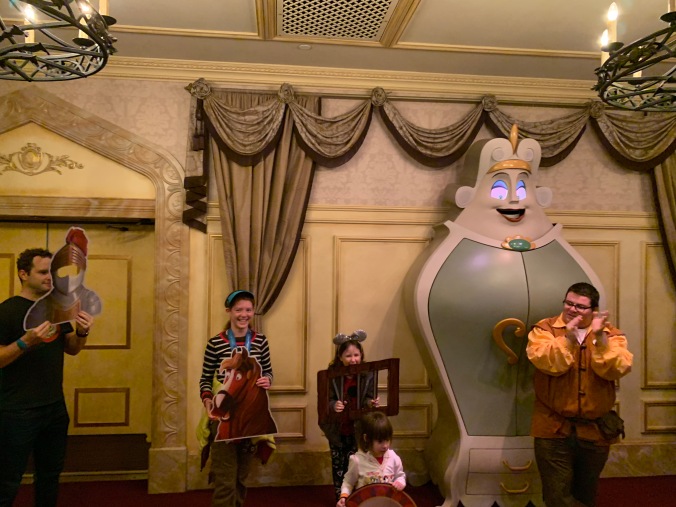 She was SO happy to be the horse in Beauty and the Beast!

Mr. Bang didn’t want to wear his medal through the park.