Act Your Wage is a game like Monopoly, except there are four card decks and only 2-4 people can play this game. This is made by Dave Ramsey, for anyone who knows his radio show or his books.  The objective is to pay off your debts and say, “I’m debt free!”  If you do that, then you win the game.

How you start this game is get one Life Card and three Debt Cards.  The Life Card will tell you how much you get paid, and what your utilities, housing, and food cost.  If you can’t pay all of this at the beginning, that’s fine.  Just put $1000 in your emergency fund.  You put your paychecks into different envelopes.  They’re not real envelopes, they’re little pictures on the board, so don’t worry about having to get out your own special envelopes.

When it’s your turn, roll the di to know any many spaces you should go.  If you land on a Spend, you take a Spend Card from the deck, read it, and pay the bank whatever amount is listed on there.  If you land on Save, then do the same, except you take from the bank whatever is listed.  Dave Says can get you a Stupid Tax.  Stupid Tax can be given to another player and they’ll have to add it to their debts that they have to pay off.  Other Dave Says cards can be Save or Spend.  If you land on Give, then you pay the amount listed to each player.

There are two Pay Days and two Bill Pays.   The Bill Pays are the times that you pay your utilities, housing, and food costs.

I really like this game.  I’d give it five stars.  Except when you get laid off, then I’d give it four stars. 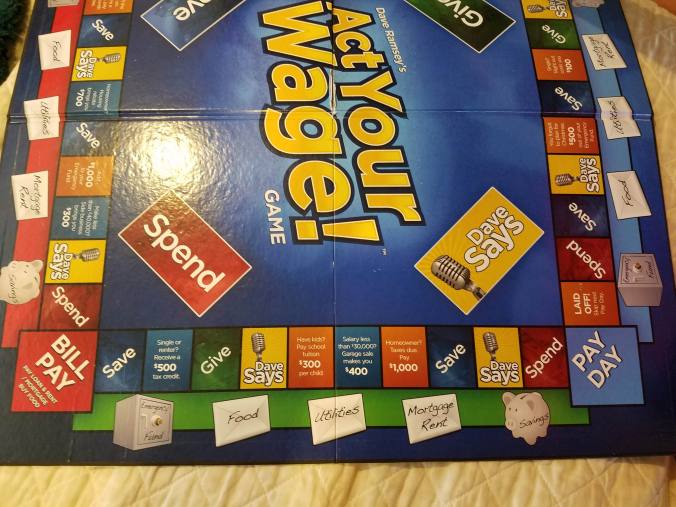 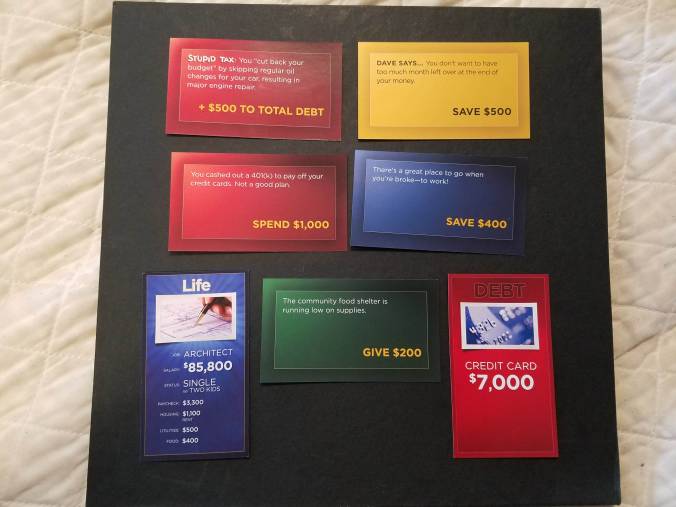 One thought on “Review of Act Your Wage”