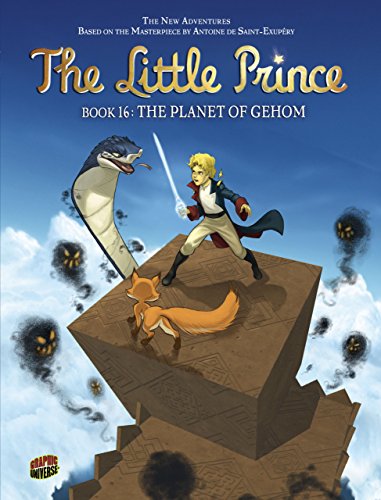 This story, which is a comic based on the classic book by the same name, is about the little prince and his pet fox.  The little prince fights an evil snake and Gloomies with magic.  They are on a cube planet.  It begins with an intro of the leaders before an evil person took over, and the magician Gehom made a magical cube that allowed their planet to turn.  The people would have to go from face to face of the planet.

It jumps forward in time to when the little prince goes through a door on his home planet and slips down a sharp edge.  When they stop slipping, they notice that the planet is tilting.  Then they see an interesting sight – a building on three cube wheels.  Some people were hauling it.  They went over to get some answers about why it was so weird.  The people who were hauling it were wondering if they were Woodlouses.  If they were  Woodlouses, and they attacked, they wouldn’t have time to get to the Great Pivot Point in time.  Then they found out, they were too far behind their city anyway, and if they didn’t catch up, they’d be thrown into outer space at the Great Pivot Point.

The little prince got his spell book, blew pages, and made circle wheels.  The haulers thought they’d never work, but they tried them anyway.  They worked, and they caught up to the city ahead of them.  The little prince met with their king.  They had a meeting and the king wanted those wheels for all the things that you haul.  The little prince just asked, “Why don’t you keep your planet from turning?”  He didn’t know how.  One of his wheels broke, and their leader went to inspect it.  He searched their meeting room and found Gehom’s key.  Then their leader came back in and said, “So I found a nest of Woodlouse spies?” They had the key.  The king of the people used evil magic to put them in cubes they couldn’t get out of outside of his building and The Great Pivot Point started to happen.

They flew off one edge of the planet then fell straight down and hit the ground.  The boxes burst open.  Then they heard someone call, “Hey you!”

What happens to the characters?  Who is this person?  You can find out if you find the book on Amazon or your local library.

2 thoughts on “Review of The Little Prince: The Planet of Gehom”