We went to the ocean area at COSI, which is a wonderful, spectacular science museum in Columbus, Ohio.  It was really cool!  I like it so much that I spent two hours in it.

You get checked in, and then you go left.  Go down the hallway to your right.  At the very end, you’ll see like a shipwreck, then you go in – that’s the Ocean.  You choose to go either left or right.

We went right.  I landed a little action figure underwater.  Next, I went in a submarine.  It was pretty neat!  You get in and out by climbing a ladder.

I played a video game. I was at an old shipwreck, and I was searching for artifacts.  I used a sand blower to blow sand off objects in a grid square.  I could only do eight grid squares before I ran out of air.  There are three items you’re looking for at the top.  Every single grid square has at least one artifact, usually more.

I love the simulation capsule.  You go in it and there are a lot of controls that I love to push.  It moves as you’re in it.  Just press the button labeled “dive.”

Next we went left into the other part of the ocean area.  First in that half, I played with streams of water shooting from metal controls. 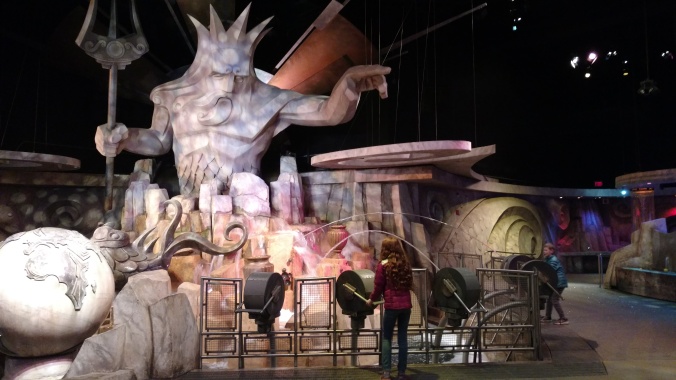 Next I did the tornado.  You just turn a knob and there’s a tornado above in a water-filled capsule.  It’s really cool!  Next I did the pipes.  That’s where you’re connecting different pipes and making water flow right into one of three big metal bowls. 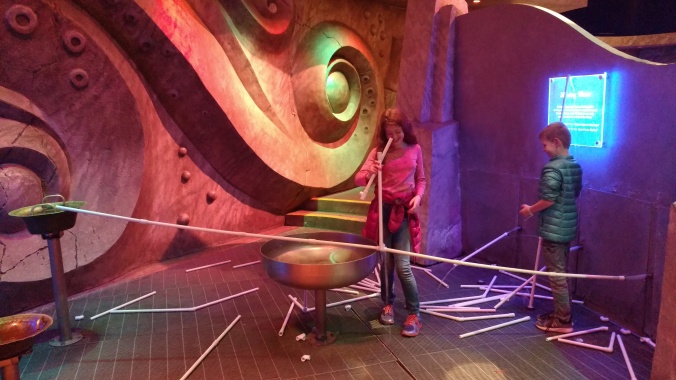 Next I did bells.  They are fun.  They are sheets of water flowing down.  It’s showing cohesion, how water sticks to itself.  There’s mist inside one of the bells; the mist is trapped inside because the water is so tightly stuck.

Next I did the fishy squirt.  It’s where you put your finger on a sensor and then a fish squirts water in the air.

The dam table is awesome!  It is cool!  I saved it for last so I could play on it without other children.  You make a dam out of sand, and there’s four plastic shovels that you put in water and try to scoop up some sand from the bottom.  I built my dam huge – it was bigger than my sister’s and bigger than I had ever seen.  The water flowing down was stopped in its tracks and flowed over the barrier which separated the two sections.  The second was for my sister; I kept breaking down her dam. 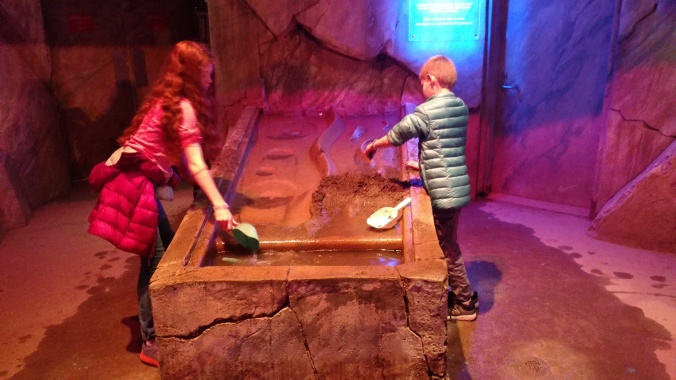 I hope I go again!  Which, since I’m sitting in a hotel in Columbus, Ohio, I think I’m going again!  I love COSI!

4 thoughts on “Review of Ocean Area at COSI”