A few weeks ago we went to Chickamauga National Military Park, with our friends Ballerina and Mr. Adventure.  When we were almost there, Mr. Adventure said he was bleeding and asked for tissues.  Luckily we had some and he used the whole box!  When we got there we found out that Mr. Adventure had cut his toe on the smoothie blender!  Then Mr Bang, Ballerina. and I went to the grass to play and Mom stayed with Mr. Adventure in the car.  It stopped bleeding and Mom put a bandaid on it.

When we finally went into the Visitors Center, we got Junior Ranger booklets.  The first room we were in was the room with the guns!  There were hundreds and they were all different!  The boys went crazy about that room. 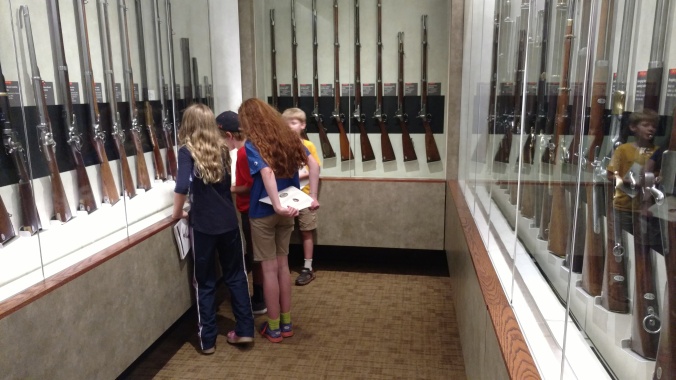 Next we saw about half a movie about the battle, but it was too bloody so we left the theater.  Since MA’s foot was cut, we couldn’t explore the battlefield so we did a little of the Junior Ranger book and looked in the gift shop.

Overall it was a good visit, although I would like to go back some time.