(I wrote this on the long drive from PA to FL a week and a half ago, but forgot to come back later and put photos in!  So this one is a bit delayed!)

I think I have fallen in love with central Pennsylvania, with its beautiful, expansive farms and stately silos standing guard throughout.  We have spent the last two weeks at the Gettysburg Thousand Trails RV resort, and have continuously marveled at the beauty around us.  Even the resort itself is a working farm, and we’ve enjoyed the regular interactions with the cute farm animals. 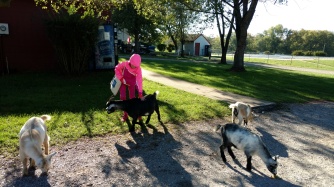 Here’s a brief recap of our field trips in the area (including dips into Maryland and West Virginia).

Although Amish communities exist in most states around the U.S., Lancaster, PA is in particular known as Amish country.  There are several options for learning about lifestyle of the Amish.  Frankly, I was overwhelmed by the options, so I just chose the one called The Amish Experience.  It includes a tour of an Amish house and school (they actually are replicas, built just for us nosy tourists, and located there at the visitor’s center), a special-effects film, a bus tour of the Amish countryside with a stop at an Amish family’s dairy farm, and a ride with an Amish man in his buggy.  The whole thing for us took nearly five hours, and I really was glad we had done it.  We learned a lot about the Amish, and even had multiple opportunities to answer questions of other tourists who didn’t do all the different tours. 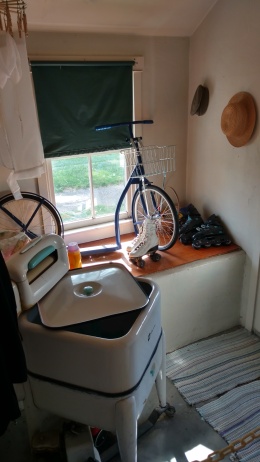 They use these old washing machines. 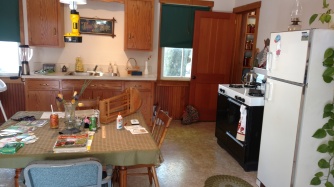 Amish dairy farm that we visited 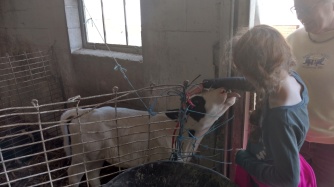 Amish buggy ride through the beautiful countryside, and to an Amish farm to get cookies 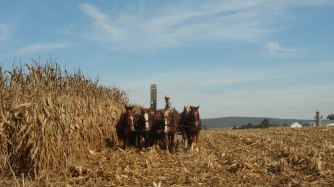 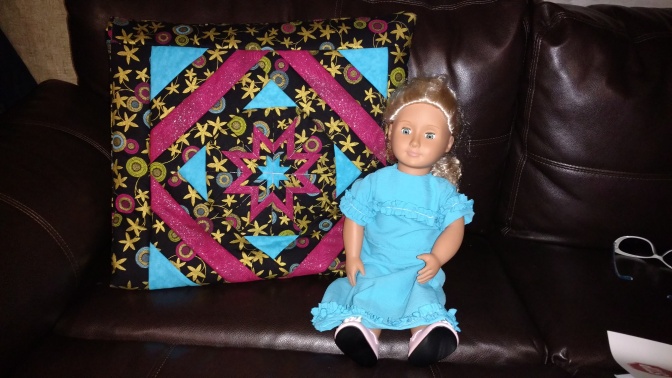 I bought this quillow (quilt tucked into a built-in pillow) and CQ bought this dress for her doll at an Amish store.

This tour was awesome!  It started with us standing around a table with a ball of dough.  While explaining the history and symbolism of pretzels, our tour guide taught us how to form our own pretzels.  Monks originally invented them as a reward for children as they memorized Scripture.  The twisted part that folds up represents folding hands in prayer – at that time the standard prayer position was arms crossed with fists leaning against shoulders.  The three segments are a constant reminder of the Holy Trinity – Father, Son, and Holy Spirit.

Our guide then explained and demonstrated how they originally cooked the big, fluffy pretzels.  Julius Sturgis was a teenager working in a local pretzel factory.  He accidentally left pretzels in the ovens overnight sometimes, and the burned pretzels had to be thrown out.  One day he decided to taste it out of curiosity, and discovered that it actually tasted good!  He unsuccessfully tried to convince his boss to sell them in the store.  A few years later, he opened his own factory, and specially made the twice-baked ones, thus being the first seller of hard pretzels. 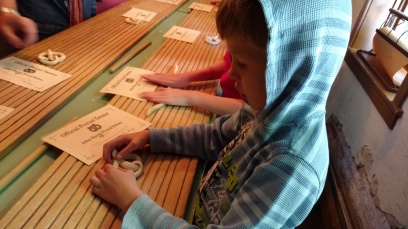 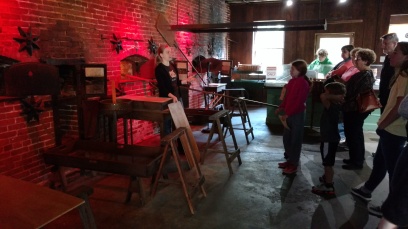 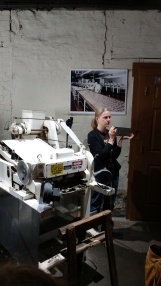 When they stopped making them by hand, they used this machine, but it broke down too much. Now they squeeze the dough like play-doh through the thing she’s holding up.

Wheatland was the home of our 15th president, James Buchanan.  We’ve visited the homes of several presidents who are regarded very highly; it was interesting visiting the home of someone considered one of our worst presidents!

I’m going to confess, I certainly have known of Eisenhower, but I barely knew anything about him.  After spending a day at his house and farm, I was left feeling a bit glum about the vast difference between an Eisenhower-type president and our current candidates.  He was a very impressive man, and so successful in leading the Allies forces against the Nazis (among other achievements) that both parties wanted him to be president!  The house itself was funny to me because so much of it looked like my own grandparents’ houses, just with many more rooms! 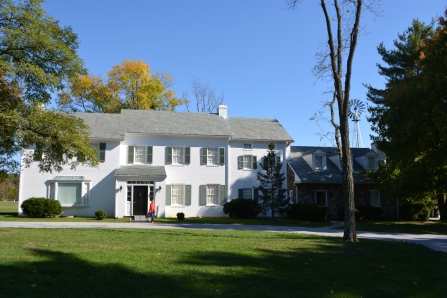 The Eisenhowers mainly ate dinners here on tv trays in front of the tv.

The Jr Ranger book was all about training to be a Secret Service agent. One task was to interrogate a park ranger to determine if he was authentic or an imposter.

We enjoyed getting to tour Gettysburg with dear friends of ours (who then even spent the night with us in our RV!).  As in Lancaster, there are a variety of ways (and prices) to experience Gettysburg.  We decided to pay money for the visitor’s center offerings (film, museum, and Cyclorama), but to tour the grounds, we just drove around on our own for free.  The battlefield definitely would have been more meaningful if we had a guide or audio CD  to tell the stories of what we were looking at, but the kids still enjoyed it. 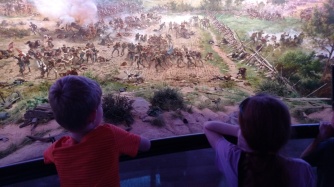 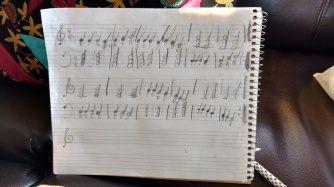 CQ carried around a notebook and kept writing down music. I finally had to tell her to just put it away and focus on what was around her!

A guy in Colonial Williamsburg was a huge help to us in figuring out when and where CQ could meet Lafayette. In return, he asked us to put a penny on this monument, 5th NH. 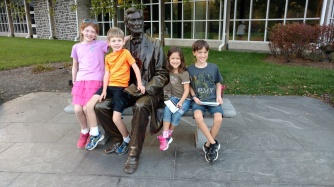 Slumber party in the RV!

This was a neat, brief stop for us.  We learned about the ships traveling along the canal and got to investigate one of the locks.  We didn’t spend much time here, but it would be fun to visit various spots along the expansive canal.

There is some history at this park (such as learning about the Catoctin furnace and presidential use of Camp David, which is located here), but it’s mainly hiking through the beautiful woods.  I’m a bit wary of hiking when it’s just the kids and I, so we didn’t go far this time.  Next time, we’ll have to bring The Brain with us so we can really explore!

This is the site of a Civil War battle that I wasn’t familiar with.  The battle happened over the farms of three families, so you drive to different spots along those farms to see where different parts of the battle took place.  The importance of this particular battle is that, although the Union lost, it gave them enough time to be prepared at Fort Stephens in order to keep the Confederates from taking Washington, D.C.

We visited Harper’s Ferry and earned Jr Ranger badges about a month ago, but we ran out of time before CQ got to try on period garb in the visitor’s center in Lower Town.  We told her then, amidst her tears, that we would make it back another time so she could put on the dresses.  While there, after letting her get her fill of dress-up, we watched the film about Harper’s Ferry, and spent some time in the Lewis and Clark museum.  We’re currently studying that expedition, so we definitely wanted to learn about the role Harper’s Ferry had in it.  Before heading out on their expedition, Lewis came to Harper’s Ferry to get many of the tools and things they needed to take with them.

2 thoughts on “Exploring Pennsylvania’s Past and Present”