Our plan all along for our Roadschooling Experience has been that as soon as the house sells, we’re hitting the road.  We can’t leave before then because our mortgage budget will become our house rental budget.  However, we got kind of a surprise trial run of roadschooling.  The Brain needed to take a business trip to Columbus, Ohio, so the kids and I joined along to be tourists!

We’ve actually been to Columbus a few times over the past year and have really enjoyed our experiences there.  On this trip, we repeated some of our favorites and tried out some new ones.

Every time we go to Columbus, we make multiple visits to COSI, a fabulous science museum located in a historic high school overlooking the Scioto River.  It includes live science demonstrations throughout the day, both a 3-D theater and planetarium, and several top-notch exhibits.  There’s even a museum-within-a-museum for kids in first grade and below.  There’s an enclosed room within that mini-museum just for the older siblings of the young kids.  Character Queen loves for Mr. Bang to go to Little Kidspace so she can hang out in the older sibling room!  This time she spent the entire time making origami creations.  During a previous visit, she worked with clay the whole time.

My favorite exhibit at COSI is probably Progress.  You first walk through a town from the late 1800s, exploring a grocery store, telegram shop, livery, etc.  Then you turn the corner and walk through the same exact town in the 1950s!  This time kids get to pretend to cook and serve a meal in a diner, shop for appliances, and either be a cameraman or news anchor for a breaking news broadcast.  It’s really done to a Disney level – every detail is so meticulously done!  The same is true in the Ocean area, where you really do feel like you’re underwater with Poseidon.

Another favorite of our family’s is the Gadget area, particularly the Gadget Cafe, where you order from a menu of science experiments.  They bring you the tray with materials for that exhibit, you work with it, clean it up, give it back, and order another!

This is a really cool little city park that brings to life George Seurat’s painting A Sunday Afternoon on the Isle of La Grande Jatte.  It was very fun walking through the topiaries and picking out the figures from the painting. 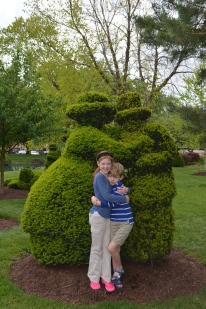 We drove to Dayton to tour the Air Force museum, which is apparently the world’s largest military aviation museum.  At the information desk, they have scavenger hunts available for kids.  For younger kids, there are pictures of planes and pictures of animals, and you draw a line to connect the matching ones (like the plane that had a nickname of Owl something-or-other).  For older kids, they write down information that they find in the signs for each plane.  Character Queen absolutely loved it!  I didn’t think she would have time to complete the full thing, but she was determined and she did it!

Exhibits are based on different time periods, and go from the Wright brothers first flight to drone military planes like the Reaper and some space craft.  A fourth building is opening in just a few weeks.  From my understanding, you’ll actually be able to walk through a former Air Force One plane in that one.

And did I mention that it’s FREE?!

This is the most interactive art museum I have ever been in!  The first floor is mainly filled with opportunities for visitors to build and create things.  The second floor is where the main art exhibits are, and many of the rooms contain interactive ways to engage kids in that particular style of art.  I was also surprised by the big names represented in this fairly small museum, including Monet, Degas, Picasso, and Pollack. 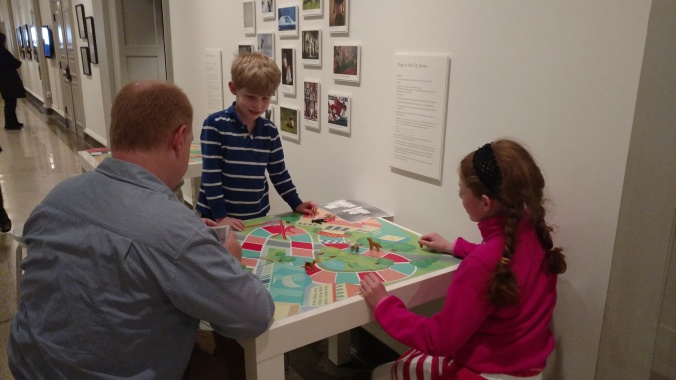 playing a board game that involved several paintings of dogs, which are on the wall behind them

working a puzzle of Degas’ Houses At the Foot of a Cliff, in front of the actual painting

This is a historic mansion that has been restored to its appearance in the mid-1800s.  It’s fun to look through the furniture and other belongings from the time period (I was particularly fascinated by the bathtub, shown in the picture below on the right), but what was most interesting to learn about was the family’s involvement in the Underground Railroad.  Apparently bounty hunters were around town, always looking for runaway slaves and people helping them.  However, they had such a low view of women’s intelligence, they paid no attention to the women gathering every afternoon at 3 for tea at the Kelton house.  Throughout the day, the women, while walking around town, paid attention to where runaway slaves were hiding and where bounty hunters were stationed.  By the end of their tea time, the husband of the house basically had a full map of the town to know where to go pick up runaway slaves, and what paths to avoid in transporting them to their next safe place.

In the house, we each had our own listening device for an audio tour.  We visited each room in the main part of the house, then briefly walked through the former servant area, before spending a good amount of time in the basement learning more about the Underground Railroad.

We LOVED our tour of Anthony-Thomas Chocolates!!  We walked along an enclosed, air-conditioned “catwalk” over the factory floor and got to see pretty much the entire process of making Snickers pumpkins.  (Snickers doesn’t want to interrupt their regular assembly lines, so they contract out the specialty items, I learned.) We watched them putting nuts through a machine to break them up, and saw them cooking huge copper kettles of a filling (I think it was for some kind of truffle).  Then we crossed into the next room where they combine the elements of the candy and package them.  We watched them first put chocolate in the mold, then add the peanuts, then caramel, then the final chocolate.  Then the candies went through a refrigerator conveyor belt before being dumped out of the molds and sent on the belt to be wrapped, boxed, and packaged for shipping.  It was such a cool (and fast!) process to watch!  We also saw chocolate covered graham crackers being made and boxes of buckeyes being shrink-wrapped.

After the tour, they gave each of us a buckeye to try.  It was the first ever buckeye for the kids, and they both loved them!  I’ve had plenty of buckeyes in my day, but this was definitely the creamiest I’ve ever tasted!  It was delicious!

They didn’t allow photos on the tour, so this is taken from their website to show what the tour looks like.

This was our one dud fieldtrip while we were in Columbus.  They advertise tours and even have a separate link on their website about tours.  However, the “tour” consisted of standing in the normal customer area of the store and watching a ten-minute video about the store.  Only about a minute showed any behind-the-scenes details.  Most of it was a rap about the store, and a staged scenario of two young men coming into the store and finding out about flavors and sizes.  It was quite disappointing.

After the “tour” we sampled probably twenty different flavors, which the kids heartily enjoyed.  The popcorn definitely tastes good, and I have no problem recommending it for purchase.  I definitely don’t recommend scheduling a “tour,” though!

It didn’t even occur to me to take a picture, so this photo of jelly bean popcorn is from their website.

You know the famous animal guy Jack Hannah, right?  Well, this is his zoo.  It’s actually not even just a zoo.  It’s a combination zoo, waterpark, and carnival.  We have not yet tried the waterpark, and unfortunately the carnival rides (including my kids’ favorite animatronic pirate water ride – no, it doesn’t compare to Pirates of the Caribbean, but it’s still fun and they haven’t been on that one!) aren’t open yet for the summer.  We did, however, get to enjoy the zoo itself!

Mr. Bang had decided that he was all about seeing the polar bears.  There is a little cub right now who we didn’t get to see, but one of the adults put on quite a show for us!  He was playing with this large blue disk when we arrived.  We watched both from the underwater viewing area and above water viewing area.  He played for so long and seemed to be having just a fabulous time with that toy!  Then all of a sudden (while we watching from above), he left the toy alone and dove into the water.  He dove around for a couple minutes, then came right over to the observation window and pinned a fish against the glass!  As it flopped around under his paw, he proceeded to put on a full dinner show for us!  From what we could tell, he didn’t let a morsel of that fish go to waste, and had no qualms with us all gathered around to watch!  Character Queen kept squealing, “That’s so disgusting!!!” But she kept watching nonetheless!

The other animals that put on a big show for us were the vervet monkeys.  Two of the little ones really acted quite a bit like my two little ones – constantly wrestling and playing chase all over their area.  They’re a bit more exciting to watch than my two, though, since they climb and leap and swing all over the place with absolutely beautiful strength and agility!  We probably watched for twenty minutes – and laughed through the majority of that!

We did see several other animals, but my kids also spent probably half their time at the zoo either climbing on animal statues or playing on zoo playgrounds.  To them, those are as much the fun of the zoo as the animals are! 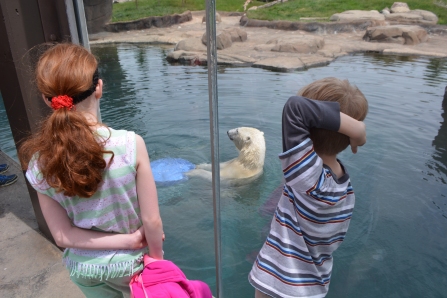 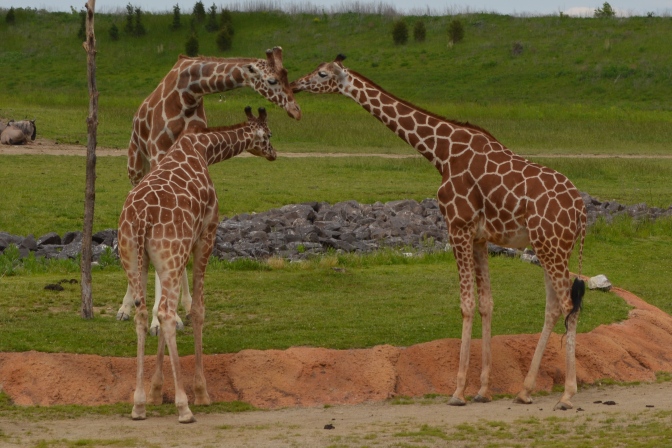